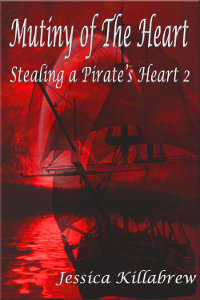 Tragedy made her a captain. Fate and her father made him her first mate. Secrets, heartache, and family may stand between them, but sometimes, love is stronger than even the most violent storm.

Cassie was born into the ways of a pirate, but a traumatizing event leaves her the captain of her father’s ship. Ayden is still uneasy about her being out at sea again, but she refuses to give up piracy again. Cassie is a strong captain, and keeps the crew inline, without any distractions, until her father decides she needs a first mate.

Austin was chosen to be a first mate, aboard a man’s ship with little knowledge of what he was getting into. Upon meeting his new captain, he was in for two big surprises, first, his new captain was not a man, second, she was absolutely gorgeous.

Falling in love with his beautiful new captain, he keeps a big secret, but when she finds out will she stay with him? Will Cassie allow herself to love the first mate?

This book is a previously released title.